[Stay on top of transportation news: Get TTNews in your inbox.]

GRAPEVINE, Texas — Trucking could be in for a period of improved conditions with the North American trade agreement updated and U.S.-China trade tensions eased, industry leaders said.

Over the past year, President Donald Trump’s trade war with China led to economic uncertainty. But an agreement on a phase one deal signals a more stable outlook on trade as well as business expansion.

“We want stability,” Spear said. “We want certainty in the market.”

That may be at hand, but the deals have timetables that will require time to implement.

Ann Wilson, VP of Government Affairs @MEMADC, is now providing us with a USMCA and tariff update at #HDAD20. 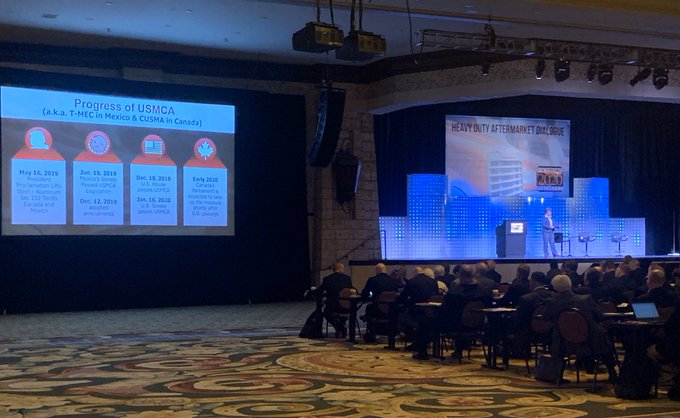 Trump is expected to add his signature Jan. 29 to the new United States-Mexico-Canada Agreement, which once agreed to by Canada, as expected, will establish detailed, phased-in updates to long-standing rules affecting trade in North America.

Trump on Jan. 15 signed the first phase of the China trade deal, after reaching a truce on the 18-month trade war between the two countries. The deal is projected to produce $33 billion in the first year and $45 billion in the second year from the export of U.S. manufactured goods, Spear said.

“We hope these agreements in place are going to bring the certainty that is necessary to bring manufacturing back online as an equal performer with construction and retail,” which make up the other pillars of freight movement, Spear said. “We look for probably as early as the latter half of 2020 to be a strong year for trucking.”

He made the comments at Heavy Duty Aftermarket Dialogue, during a discussion with Ann Wilson, senior vice president of government affairs at the Motor & Equipment Manufacturers Association.

Trucks move 76.5% of surface freight between U.S. neighbors — 81% and 72% of the border crossings with Mexico and Canada, respectively, Spear said.

For November alone, the U.S. Department of Transportation’s most recent data, trucks led transborder shipments with $62.7 billion in freight, down 4.1% from a year ago. U.S.-Canada freight movement was $28.3 billion while U.S.-Mexico accounted for $34.4 billion.

Freight moved across the borders by all modes of transportation tallied $99 billion in November, down 3.9% from a year ago, the agency said.

“We have a lot of work to do in terms of the implementation and to be certain [USMCA] is successful going forward,” Spear said.

That holds true for suppliers and manufacturers, too, said Wilson.

The goal with USMCA was not to change the underlying language of the earlier NAFTA agreement because if that had happened, “we were going to start back at zero,” and that would have prevented either keeping NAFTA or crafting something new, she said.

“As you look at this, I would make sure that there are people within your organization who understand where in the agreement the critical portions of the language are. You need to understand every single one of your tariff codes, where they fit in the agreement,” Wilson said. “And it’s mind bending. It looks like it is splitting hairs but, understand folks, that is how this agreement is put together. And that is how it is going to drive the content requirements and anything else that you do.”

A key aspect of USMCA, aimed at boosting manufacturing, requires vehicle manufacturers to ensure 70% of the steel and aluminum they use is purchased from North America, she added.

In part one of a two-part exploration of autonomous technology today, our latest RoadSigns podcast revisits conversations with CEOs Alex Rodrigues of Embark and Cetin Mericli of Locomation. Hear them explain what testing automated trucks and developing platooning technology has taught them about the road ahead — and get new perspective with host commentary. Listen to a snippet from Rodrigues above, and to hear the full episode, go to RoadSigns.TTNews.com.

The full benefits of the agreements will take time to ripple through the U.S., while growth is slowing in other global markets, said economists speaking at the event — with Germany already in an industrial recession.

Meantime, the U.S. economy is reverting to trend with GDP at 1.8% to 2%, amid “the longest economic expansion in U.S. history, 126 months of continuous growth,” said Bill Strauss, senior economist of the Federal Reserve Bank of Chicago.

How and who companies do business with is changing, and will continue to change, said Bob Dieli, economist at MacKay & Co., which presented the Heavy Duty Aftermarket Dialogue along with the Heavy Duty Manufacturers Association.

“We are in a trade war and supply chains won’t reset anytime soon,” Dieli said.